Okay guys, time for my first restaurant review!  And seriously, I didn’t go out tonight with the expectation that I would find something to rave about, BUT I just had a pretty damn good seafood paella….  I decided to grab some dinner after work with my good friend from grad school, and her boss had recommended this place: Fig and Olive.  It’s on 52nd Street between 5th Avenue and Madison Avenue.  Man, it was pretty good.  Expensive, but good.

Upon entering this place you can tell it’s totally chic, with a well-dressed post-work crew sipping martinis and being totally New York-ish.  I mean, there’s nothing more New York-ish than good food, amiright?  Upon inspection of the menu you can see it’s a Spanish place, although thankfully it’s not a tapas menu because I was REALLY FREAKING HUNGRY.  There were a million good options too, like fig and gorgonzola risotto, grilled salmon, and lobster bouillabaisse.  What to choose, what to choose…?

Eventually I settled on the paella del mar (or seafood paella for all you non-spanish speakers like myself).  Paella is rice boiled down in saffron and spices with an assortment of meats and some vegetables.  Side-note: Matt and I went to Barcelona in May, and Barcelona has some pretty freaking good seafood paella.  I’m not going to suggest that this paella was the same thing as real authentic Spanish paella, but this dish certainly could stand alone.  Mine came with shrimp, scallops, mussels, and calamari.  The seafood was just-barely cooked, which, if you ask me, is the mark of a good seafood place, because if you cook it too much the seafood becomes tough and looses it’s delicate flavor.  And this was intensely flavorful, and although it was much more liquidy-er than authentic paella, I totally didn’t mind because it allowed me to have something to absorb with my carbs… I mean, my bread.

Oh yeah… the bread.  The bread was delicious and served with three different types of olive oil each infused with something different.  I think one of them had mint infused with it, and the last one had tomato infused with it, anyways, who cares?  It was so good that I ate 3/4 of it (my friend is gluten free so I didn’t feel too too guilty…I can’t let it go to waste, right?) 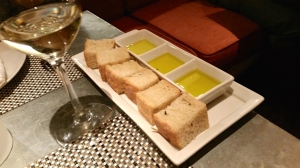 OH, also, the wine was pretty darn good also.  More on the wine later….  But all together the meal was incredibly scrumptious.  Totally good example of an awesome New York restaurant.  It was well prepared, the service was good, and the atmosphere was nice after a long day of work.  My friend got the fig and gorgonzola risotto with shrimp, and it was so delicious and cheesy.  It was pretty heavy though, and she struggled to finish it (don’t worry, I helped her with that.) 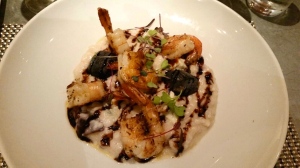 The ONLY thing I have to say about this place is the cost of the booze.  Believe me, I worked in the food service industry A LONG time (too long) so I’m seriously the last person you’d hear me complain about something like this.  But the glasses of wine were like, really expensive, even for my alcoholic standards.  When we got the check it turned out that each glass was $16.  I’m no cheapskate but even I thought that was a little extreme….  True, we hadn’t looked at the prices before we ordered but even in New York a glass of wine shouldn’t be $16…. And I’m being a total hypocrite because I used to hate it when my customers would say stuff like this, but I wish our server kinda mentioned the fact that these glasses of wine were above-average prices.  Anyways, don’t let that perturb you.  Overall I had a fab experience and would def go back again, although this time I would look a little closer at my alcohol options 🙂  I’d say 4 out of 5 stars if my opinion matters at all! 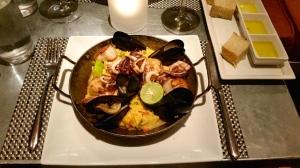 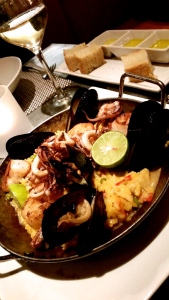