It’s sad that so many New Yorkers never really get the chance to get uptown and explore Harlem!  Lots of neighborhoods are pretty cool and cute restaurants and bars are popping up everywhere, especially West Harlem.  I used to live up there during my time at Columbia, and so I got to know west Harlem’s restaurant scene pretty well.  Harlem is especially good for it’s southern cuisine; it’s soul food restaurants are the best in the city no doubt.  For brunch today we hit up a Harlem staple: Harlem Tavern, and it was just too good not to review!

Harlem Tavern is a classic example of the type of trendy spots opening up all down Frederick Douglas Boulevard.  It’s got a outdoor beer garden vibe, and it has live jazz on Saturdays and Sundays!  The outdoor patio is huge and covered my an overhang, and they probably have it heated in the winter.  It’s got a lot of TVs indoors which makes me think it’s probably pretty bumpin’ for football.  It’s got a creole-spin to the menu (which I love btw) and brunch comes with a complimentary bloody mary, mimosa, Bud Lite, or Shock Top!  I know, I know, it’s far from my beloved “unlimited brunch” which I hold near and dear to my heart, but today we decided to take it easy and settle for just one free drink (we of course bought additional drinks).  The food at this place kinda compensates for the lack of unlimited alcohol.

The menu has a good variety for brunch, with several egg, sweet, and savory options.  The waitress recommended the french toast to us, but I typically like to go more savory.  I ended up getting the Codfish Po’ Boy (who doesn’t love a good po’ boy?!).  Man oh man was it good.  The fish was fried perfectly and it was topped with pickled vegetables and a delicious chipotle mayo.    The bread it came on was seriously delish.  I think it was a ciabatta?  It was so soft and carb-y.  And the fries were awesome!  Nice and golden and the perfect amount of salt.  I seriously hate it when restaurants fry their fries too long and they’re all dark and brown and shriveled.  Gross.  But these babies were irresistible.

My boyfriend got the Spring Omelet, which has shrimp, lobster, veggies, and asparagus.  I’ve gotten this before, and it’s equally good.  Only downside is it doesn’t come with home fries or fries or anything.  We don’t want to be too healthy, now do we? My other friend got the Croque Madame, and this was a pretty good lookin’ dish.  Ham, cheese, and a pretty sunny side up egg on top. 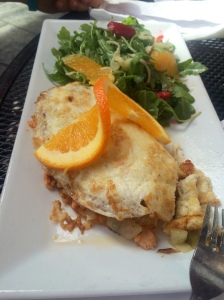 Are you jealous?  Come on, look at those pics!  By the end of the meal we were all in food comas.  And in fact Matt and I couldn’t even take the bus back, we just hopped in a cab and passed out for two hours.  Seriously.

In summary: go here.  If you live in New York, suck it up and make the trip uptown!  If not, live vicariously through me.  This place I give 4.5 out of 5 stars.  The atmosphere and food really can’t be beat.  There’s really nothing I can think of that would explain not giving it 5 stars, except I don’t give away 5 stars easily!  I’m holding out.  Keep posted for when I give my first 5 stars 😉