This blog post is long overdue.  Jacob’s Pickles on the Upper West side is truly a New York gem, and is talked about by New Yorkers all over the city, not just Upper West Siders.  What makes this Southern comfort food grub hub so popular is it’s unique specialties: Biscuits, beer and pickles!

I’ve been meaning to write about Jacob’s Pickles for a while now.  I actually went a couple weeks ago, but it was right during the holidays and I had so many blog posts to write that I kept procrastinating.  But this restaurant is the epitome of a bloggable restaurant because it’s not something that the tourists know a lot about, but it’s a been a huge success on both the Upper West Side and New York in general.  It’s located right between 84th and 85th Street on Amsterdam Avenue, which has a million other amazing restaurants and bars as well.

We were in the mood for Jacob’s Pickles after Matt got off of work around 8 one Friday night.  I knew the wait would be absurd (no reservations for parties under 6) so I scurried over about an hour before Matt got off to put our name on the list.  That’s really the only bad part about Jacob’s, is the wait.  The wait is STUPID LONG.  Like 2 hours long.  And like I said, you can’t make a reservation ahead of time.  So you’re basically forced to go to the surrounding bars to wait it out.  In our case, I think they told me that a table for two would be about an hour and a half wait, which was fine because I was waiting on Matt anyways.

By the time they texted us, it was a good two and a half hours later (about 45 minutes over the expected wait time).  But nevertheless we walked over and checked in.  But low and behold, when we got there they told us that our “table” would be two counter seats RIGHT NEAR THE DOOR where people are piling in and the frigid aid from outside is blowing in.  I’m not one to complain often, but this was just not okay by me.  The meal would have been completely unenjoyable due to the 20+ people crushed in around the door trying to put their name on the list.  We mentioned to the hostess that we had waited long over our estimated time and that it wasn’t an acceptable table for us.  I promise, I felt really weird doing this but I was getting hungry/angry and that table was not the vibe.  She told us that another table would be another 25 minutes and I was like “umm are you kidding?”  At this point the head chef (or someone with authority wearing a chef jacket) came over and asked if everything was okay, and we told him the situation.  He immediately offered to send our table free appetizers, but we turned them down because it really wasn’t necessary, we just wanted a table.  So he called the manager over and we were immediately sat at a two-top in the back.  I hope wasn’t overly biotchy but I was getting really agitated.  But finally we got our table.

Our waitress was super sweet and although you could tell she was really busy, she came over immediately and started getting us our beers and appetizers.  You could see the frantic look in her eyes that I know all too well as being way too overwhelmed.  But we ordered the deviled eggs and poutine as an appetizer and a couple Belgian beers.

I have to say, those deviled eggs were GINORMOUS.  Biggest deviled eggs I’ve ever seen.  The extra-large eggs were just piled with the mayo and yolk, but it was really, really good.

And don’t even get me started on the poutine.  I honestly think the poutine was the best poutine I’ve ever eaten, including when Matt and I went to Montreal in September.  God I could have eaten it all day.  The cheese was melty and the gravy was salty and hearty.  The fries weren’t too overcooked either; I hate it when fries are like burnt crisps for poutine.  Unfortunately the picture doesn’t do it justice because it was really dark in the restaurant and I was having a really hard time getting good pictures, but I’ll include one anyways. 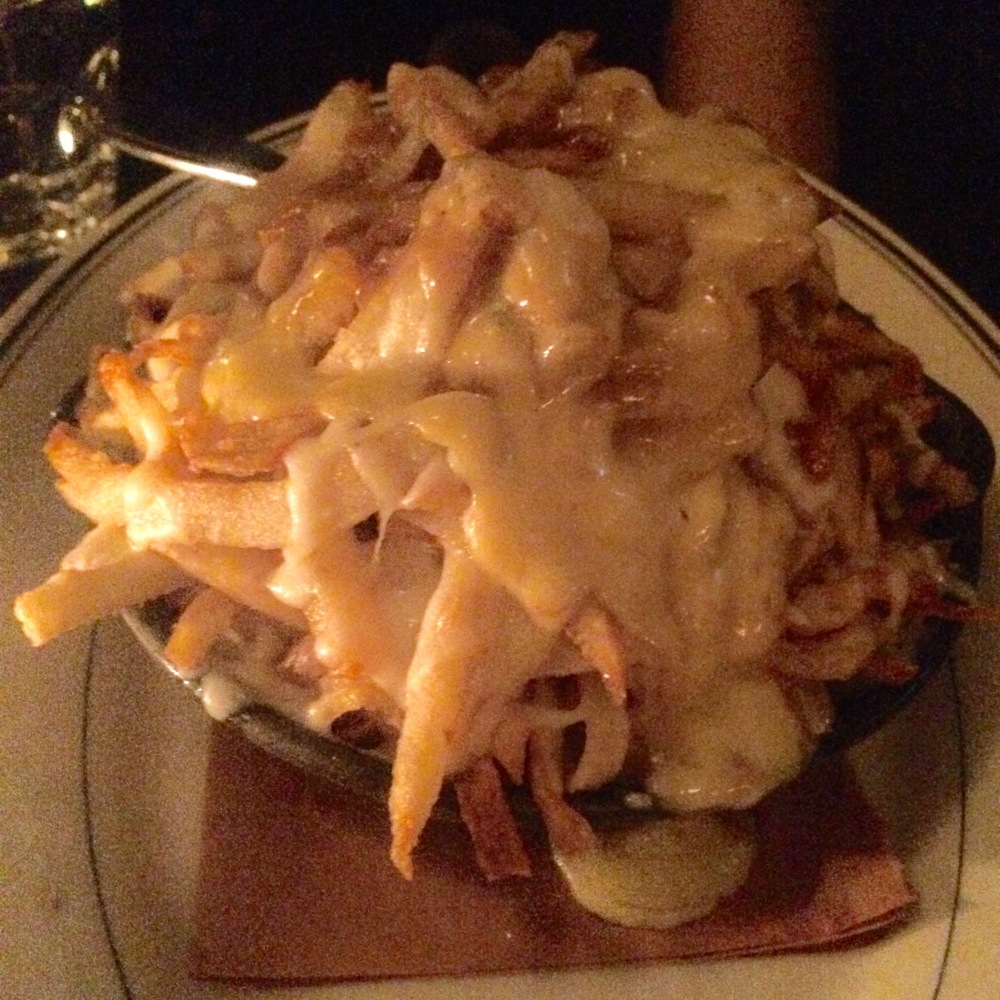 The last time I went to Jacob’s I also got the pickle sampler as an appetizer, and it’s awesome because it’s not just pickles cucumbers; they have pickled carrots, tomatoes, peppers, etc., and with all different flavors.

I ordered the catfish tacos as an entree because I was trying to eat a little lighter.  Make no mistake, this restaurant is not for those who are trying to diet.  Everything is heavily breaded, fried, and loaded with cream and cheese.  But that’s what Southern food is all about, isn’t it?  I’d have been disappointed if it was anything other.  Matt ordered the fried BBQ chicken, which is topped with a biscuit, pepper jack cheese, and a side house-made of creamy BBQ sauce.  Ohmagawd. 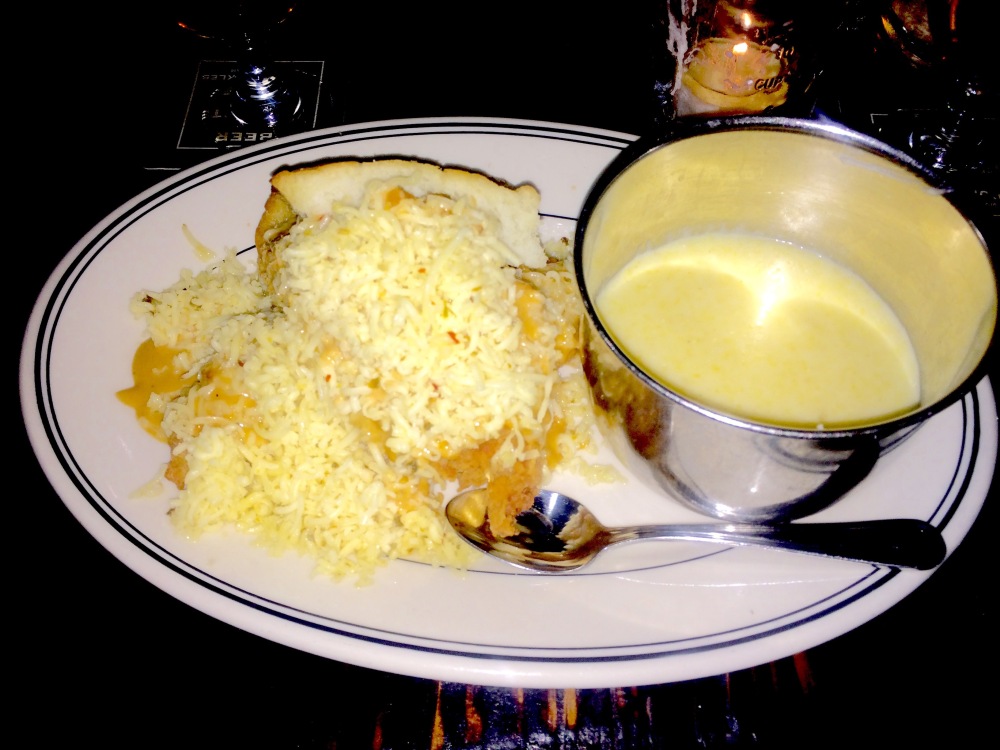 The last time I came, I got the Mushroom Mac N Cheese as my entree, which was fantastic but HUGE.  Seriously the portion was a skillet the size of a dinner plate, and packed to the brim with mac and cheese.  I barely scraped the surface when I ate it last time, so I took it home and worked on it for a week.  That’s right, a whole week.  So if you’re not trying to have mac and cheese every day for the rest of the week I would recommend getting the side of mac and cheese, which is totally big enough for a meal. 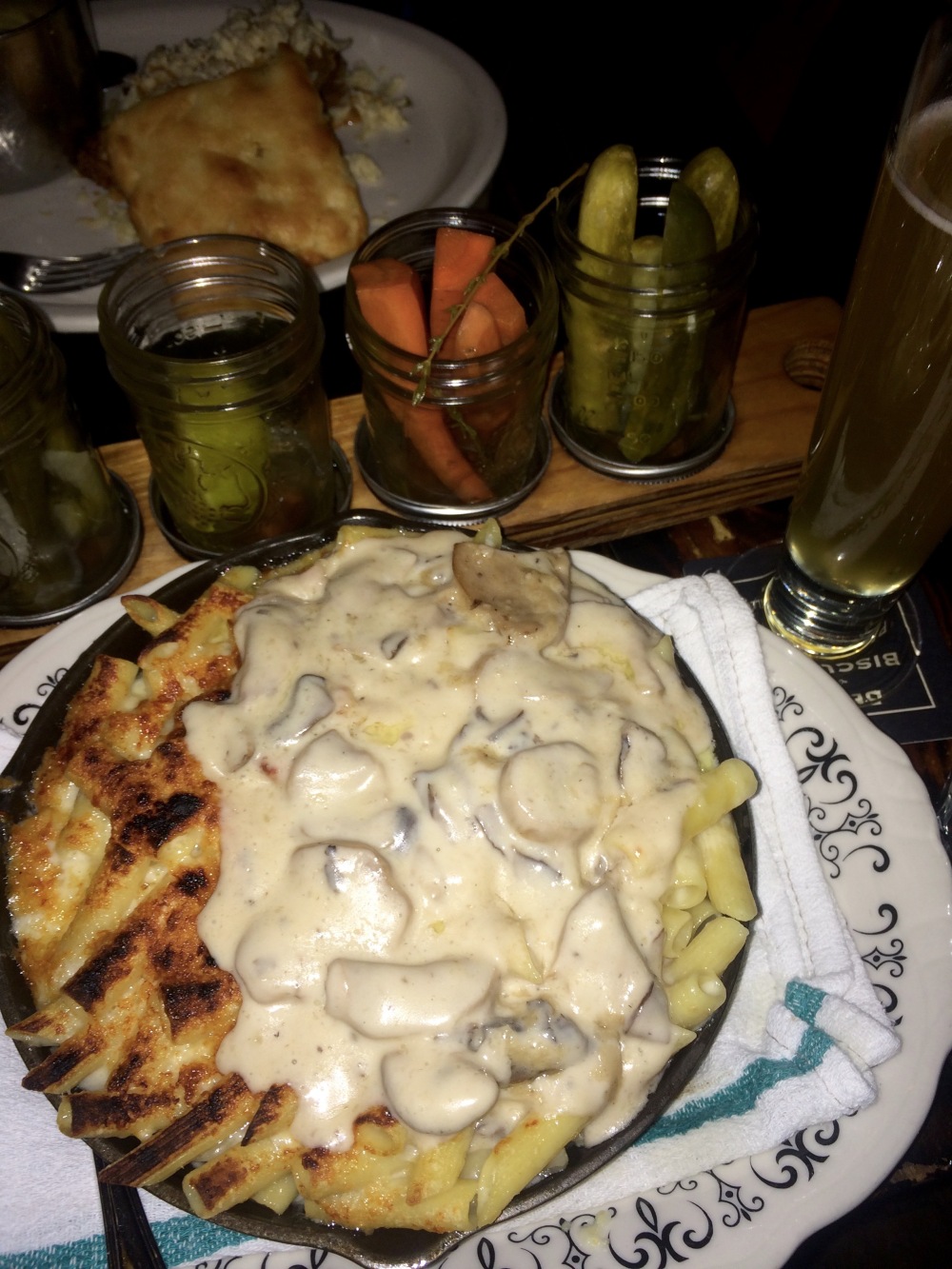 By the time the meal was over we were ready to pop.  We both took our leftovers home (which is unusual for Matt) and I scarfed them down the next day for breakfast.  Jacob’s Pickles gets 4/5 stars by me!  Make the trek up to the UWS to experience it for yourself!