I’m pleasantly surprised to have found a cute little Brazilian restaurant that serves a pretty decent bottomless brunch, just steps away from my apartment!  Zebu Grill on 92nd Street is still waiting to be discovered, but has great service, delicious Brazilian food, and most importantly: unlimited mimosas, caipirinhas, and Bloody Marys!  Yum!

I’ve walked past Zebu Grill several times and each time I thought to myself, “Hmm, I should try this Brazilian place!”  To be honest, I can’t say for sure if I’ve ever eaten a purely Brazilian dish, and I wasn’t even sure Zebu would have any vegetarian or pesceterian options.  But yesterday was a Sunday and I was doing my usual bottomless brunch scoping and we were drawing a blank as to where we could go that we had never been before.  I brought up Zebu although I wasn’t sold on the idea.  But finally we walked past and were like “what the heck, let’s try it!”  Any place with $8 unlimited brunch cocktails is okay by me.

The reason why I was unsure about this place at first is because I’ve never seen it busy.  That doesn’t necessarily mean that the place is no good, but in NYC it’s a good indicator.  However I think in Zebu’s case they’re a relatively new restaurant and not in the best location.  I’m glad we went in because it’s actually a cute little spot and the drinks and food are great!  If this restaurant was just in a slightly different location I’m sure it would be packed.  I’m really rooting for this little place to make it!

There was only one server working the brunch shift when we were there, and he was bartending and running and everything else.  And he was great!  I wish I got his name.  When I told him I as pesceterian he really worked with me to try and suggest some things I could eat.  He let us order off the dinner menu since the brunch menu was limited on their vegetarian options.  He also was really on top of our drink orders and brought out a couple pitchers of mimosas since we were brunching so hard.

We started out with two Bloody Marys and an order of the cheese toasts.  I wasn’t sure what cheese toasts were but the waiter said they were a common Brazilian thing so we went ahead and ordered them.  I figured you can’t ever go wrong with carbs and cheese, and low and behold I was correct again!  The Bloody Marys were delicious; they were flavorful and well mixed, but not too heavy or over-the-top.  Second, Matt ordered the caipirinha, which I was surprised to learn he had never had before!  So I made sure to brag to him how familiar I am with caipirinhas. 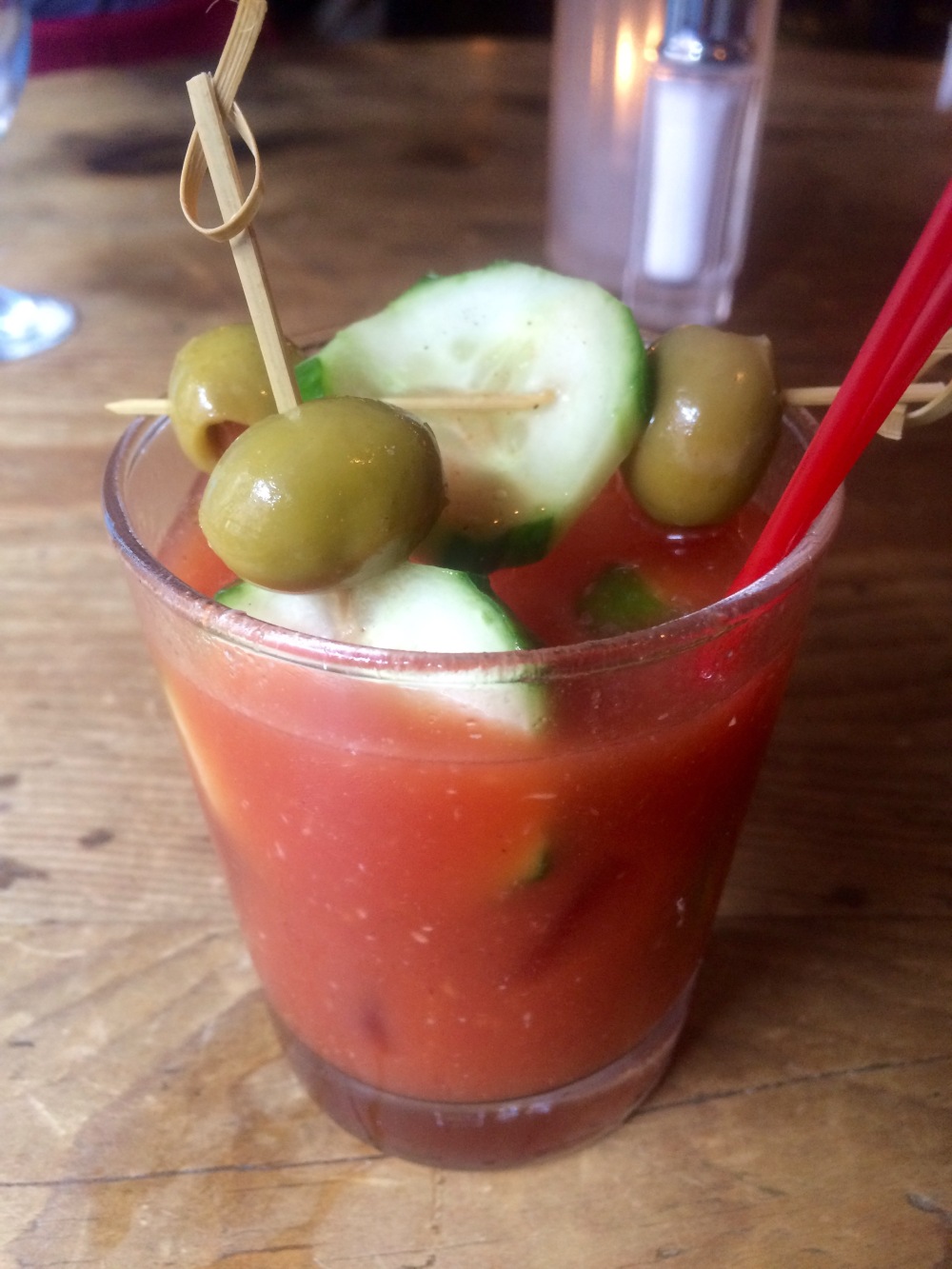 And of course the cheese toasts were divine.  We saved couple little toasts to dip in our broths and it was heavenly 🙂 They were firm on the outside but soft and cheesy on the inside.  Also, the waiter brought out additional bread that comes with the meal with the most amazing garlic butter ever created.  I about died putting the garlic butter ON the cheese toasts.  Don’t judge.

I order the Muqueca Dr Camarao, which is shrimp cooked in a hot pot with coconut milk, tomato, lemongrass, and spinach served with rice and collard greens.  Now, since I’ve never eaten Brazilian food before I can’t speak to this dish’s authenticity, but I thoroughly enjoyed it! It was flavorful and the shrimp were succulent, and mixed with the rice was so yummy.  The flavor reminded me of a cilantro lime shrimp with bell peppers or something.  The rice was topped with farofa, which is a kind of flour mixture that thickens the broth when it’s poured over the rice and adds a subtle flavor that I couldn’t put my finger on.  So many new things!

Matt ordered the the Feijoada, which apparently is Brazil’s national dish.  It’s meat, meat, and more meat in a black bean broth, served with rice, collard greens, and farofa.  I tasted the broth and it was certainly beefy and beany and tasted good, although personally I preferred the lighter and more complex flavors of my shrimp. 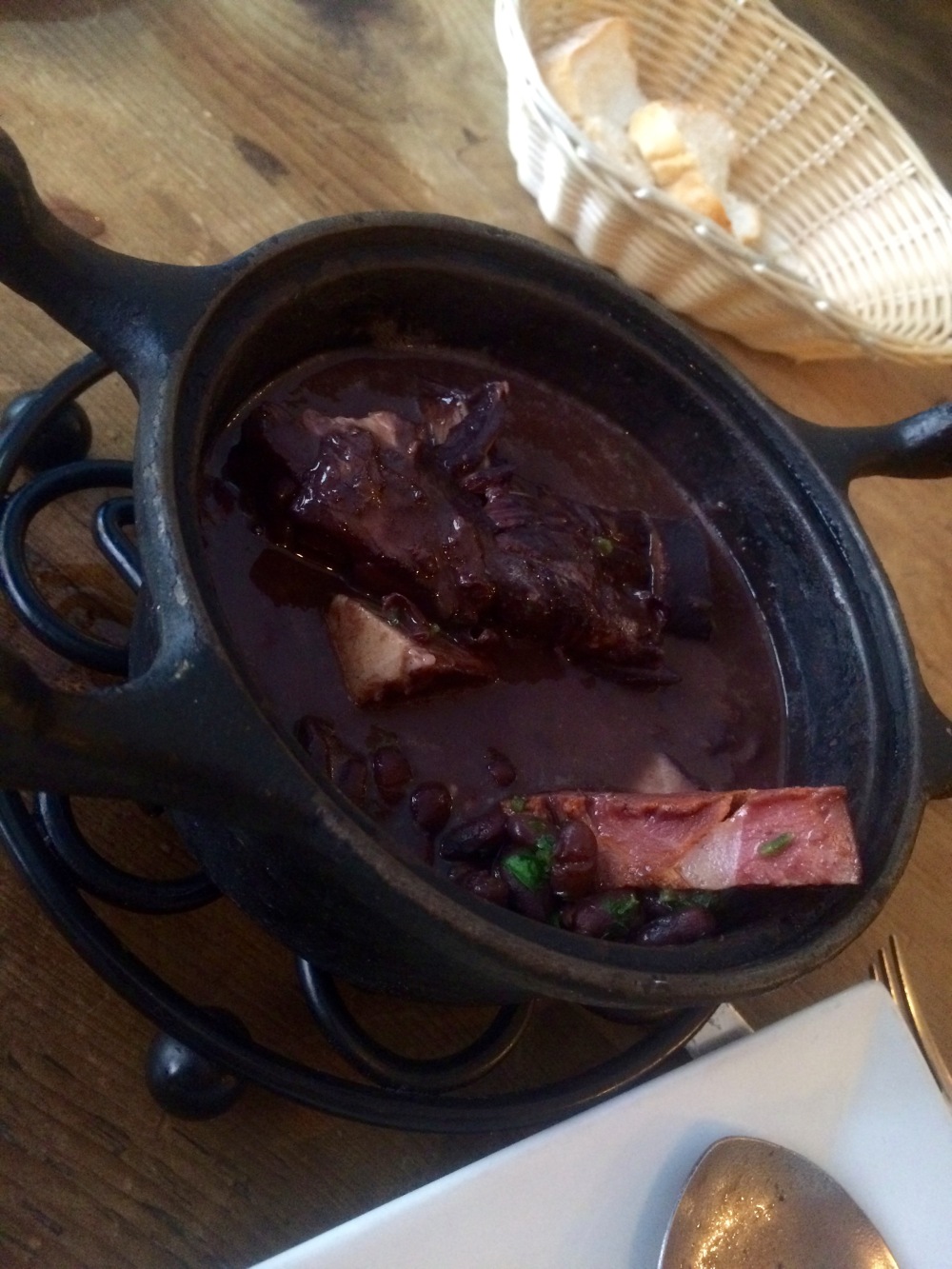 By about our 4th mimosa we were feeling pretty good and having a great time.  We were also the only people in the restaurant so we felt like we could make fools of ourselves with no judgement.  The waiter was cool with it and even indulged our drunkenness.  I would love to go back again someday!  This place gets 3.25/5 stars!