This is an absolute gem of a dish that I got from my Indian cooking class in January.  The flavors in this Kolambi Balchao, or Pickled Shrimp, are incredibly complex and will keep you guessing as to what goes into it.  These succulent shrimp are marinated in a flavorful and warming combination of herbs and spices and simmered with veggies.  It’s the absolute perfect Indian seafood dish and I’m dying to make it again!

Out of the 5 recipes from my Indian cooking class that I’ve tried by myself, I feel like this is one that I really nailed!  What’s so infuriating about taking the class was that our instructor kept his spice combination oh-so-secret and wouldn’t let me in on the ratio of the THIRTEEN spices that were frequently used.  The recipes use pre-measured spice kits, so basically when I try and cook one I open a spice pack and sit there pondering it and making notes about what I think is in it for about half an hour.  I’m obsessed.

So, as a disclaimer, I’m not going to give you a definitive recipe of the Pickled Shrimp.  Instead, I’m going to give you a general sense of how I made it and the techniques that are involved in it.  Sorry, sorry, I know.  But even though I’ve got a good idea about what I think goes into it, I obviously don’t want to be wrong and be the reason that you serve a gross meal, and I also don’t want to steal our instructor’s wonderfully crafted recipes.

What I would suggest is that you purchase a few of his recipe kits yourself 🙂 Read the full review of my class here. 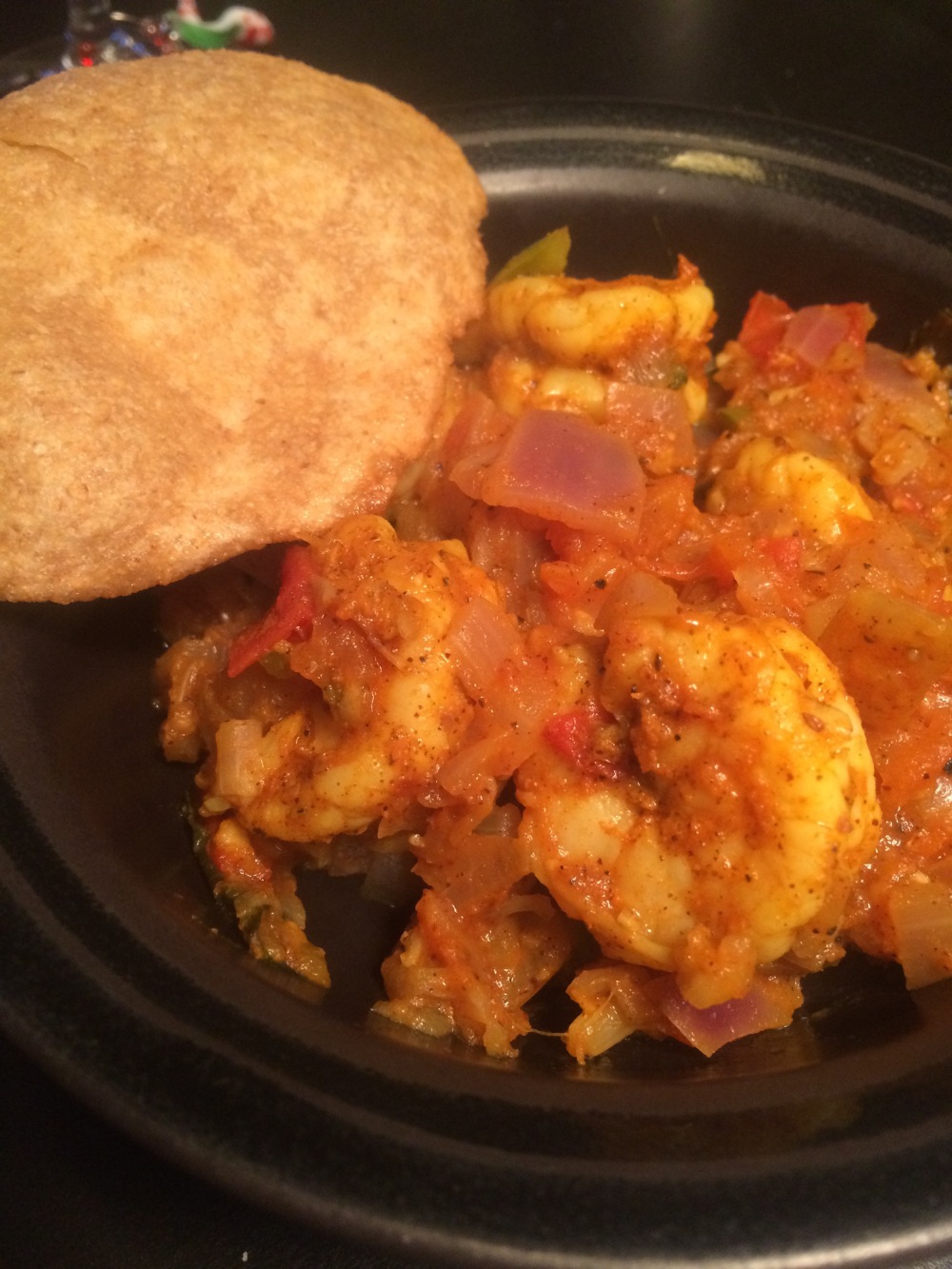 The thing that boggles my mind are all the spices that goes into one dish.  This one in particular has cumin, coriander, mustard seeds, black peppercorns, red chili, turmeric, and curry leaves.  And that’s literally nothing compared to these other recipes, and the reason why I feel comfortable that I know the proportions.  The other recipes that I’ve tried, I look at the spice packets and have absolutely no clue what’s in them.

To begin this dish you want to dry toast cumin seeds, coriander seeds, and mustard seeds for about 30 seconds.  You know when it’s ready because the spices will emit a fragrant aroma.  Using a mortar and pestle grind these spices coarsely.

Next, these spices are combined with grated ginger, crushed garlic, red chili, turmeric, salt, and red wine vinegar to create a marinade.  This is where the “pickled” shrimp comes in.  Rub the marinade on the shrimp and let it sit for about 10 minutes.

In a large pan or wok, you toast dry curry leaves in olive oil until fragrant.  Again, I love how Indian cooking is so heavily reliant on senses like smell and taste instead of set timing or measurements.  Then you add some onions, some jalapeño, and eventually a couple tomatoes and simmer this all down with a little bit of water.  Once the tomatoes are cooked down you add the shrimp with their marinade and cook until opaque.

I served this dish with puri, which is an Indian bread made by frying dough balls, which makes them puff up.  It’s actually ridiculously simple: you take a cup of wheat flour and add water slowly until the dough forms into large crumbly pebbles, roll it into little balls using a little bit of oil so it won’t stick to your hands, and roll it out into 4 inch spheres.  Then you slide them into HOT oil and flip it to the other side after the dough puffs.  Voila!  Although when I made them the other day they were considerably worse than the first time I made them — I think I added too much water.

I really can’t wait until I have an excuse to make this Pickled Shrimp again.  The flavor is just so awesome.  You can really taste the chili and cumin, and you get the sensation of eating a really spicy dish, but it’s not actually that spicy!  You’re tasting the flavors of the spices instead, and I love how the shrimp just absorbs it all.  And the fresh veggies add a nice crunch and contrast of flavor.  Seriously, if you haven’t discovered the joy of Indian food yet you need to get yourself to the nearest book store and buy a good Indian cook book.  I think that will be my next move so I can finally stop obsessing over spice proportions.  I’ll let you know if I find a good one! 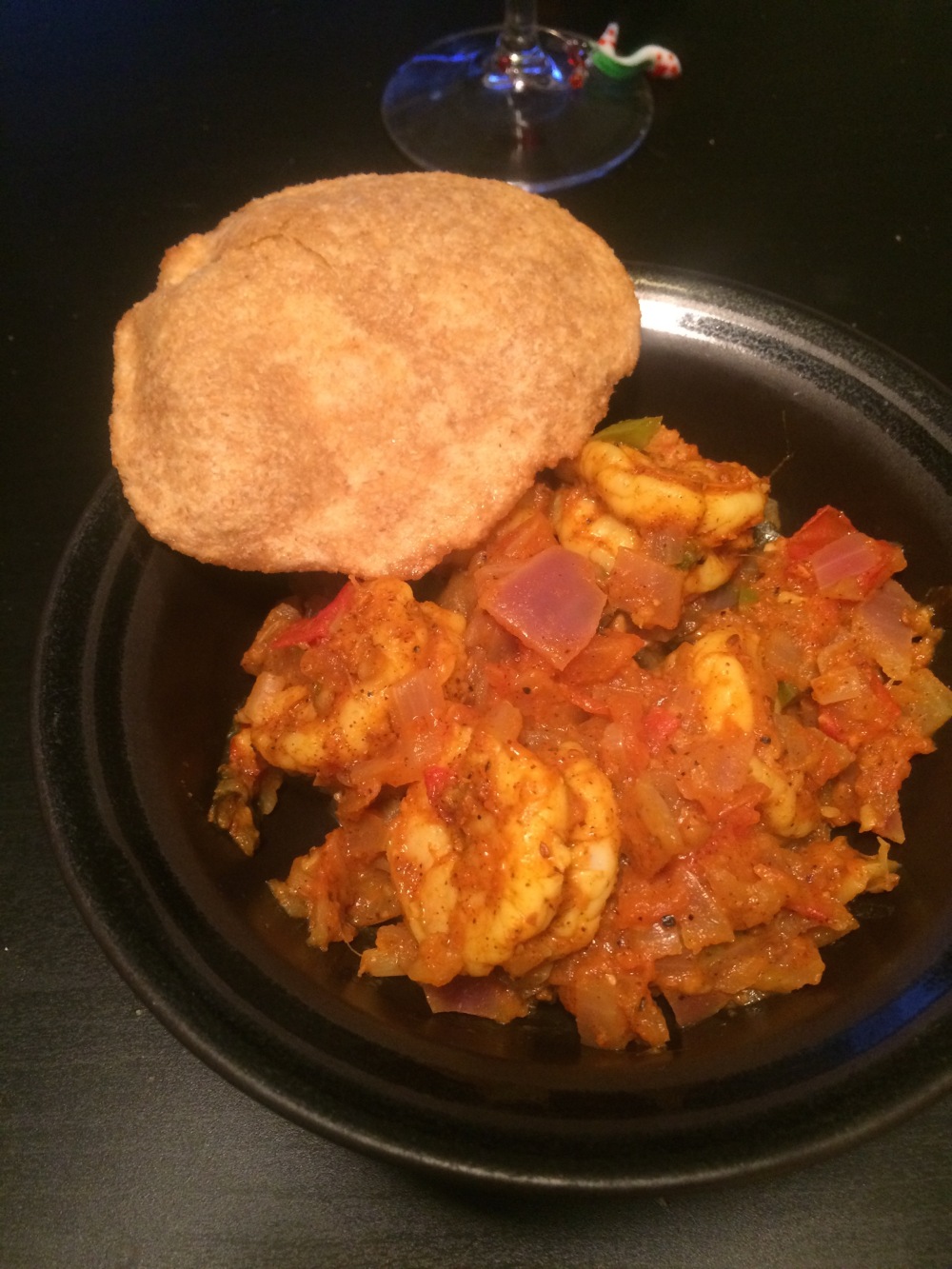