I’m super excited that an amazing seafood restaurant, Crave Fishbar, is now open on the Upper West Side!  Located on Amsterdam Avenue, Crave serves delicious and fresh seafood dishes packed with flavor and originality.  Not to mention, their $1 oyster happy hour is the best in the neighborhood.

I’ve had my eye on Crave ever since it first opened a few months ago where the Brother Jimmy’s BBQ used to be.  And I couldn’t be happier; Brother Jimmy’s wasn’t the most worthwhile place in that area.  When Matt and I passed by it the other week we saw that they have a $1 oyster happy hour every day from 4-6 PM!  And we looooove oyster happy hours.  Really the only other good oyster happy hour joint on the UWS is Mermaid Inn, but lately I’ve been disappointed with the quality of oysters there.  So we decided that we’d give it a shot on our next date night.

A couple days ago we had tickets for Book of Mormon, which started at 7.  Therefore, we wanted a place with a good happy hour that we could go early to and eat before the show.  So what better time for oyster happy hour than a Broadway date night?  And it turned out to be absolutely perfect and my new favorite seafood spot!

We had a reservation for 5:15, and immediately we ordered drinks and 18 oysters.  Now, normally, 18 oysters would set you back about $30-$40 at a normal restaurant without a happy hour, so getting them for $18 is a steal.  Usually however, most restaurants use their cheapest oysters for their happy hours, and sometimes the experience really suffers as a result.  I’ve had dry oysters, bland oysters, and oysters where the shell basically crumbles in.  That’s kind of what I was expecting, especially since that’s been the case the past few times we’ve tried.  Well, let me say, it couldn’t have been more opposite this time.  We tried three different types of oysters (usually they only offer one kind) and they all were delicious, juicy, and immensely flavorful.  We tried the Neptune Choice, which was large and meaty, the Point Lookout, which was smooth and juicy, and the little Beausoleils, which were small and packed with salty flavor.  They were served with lemon, lime, and grapefruit.  Wowza!  On top of that was vinegar, cocktail sauce, and freshly grated horseradish.  Is this real life?

In terms of drinks, I ordered a Bloody Mary.  The menu said it had 16 ingredients in it, but the waiter said that it had 26 ingredients!  Still not sure who’s right, but either way that’s a lot of freakin ingredients and it was super delicious!  It had a perfect balance of flavors.  Matt got the Hotline Bling, because he asked for something spicy, which had chile tequila, lemon, and fresh raspberries.  MMMM. 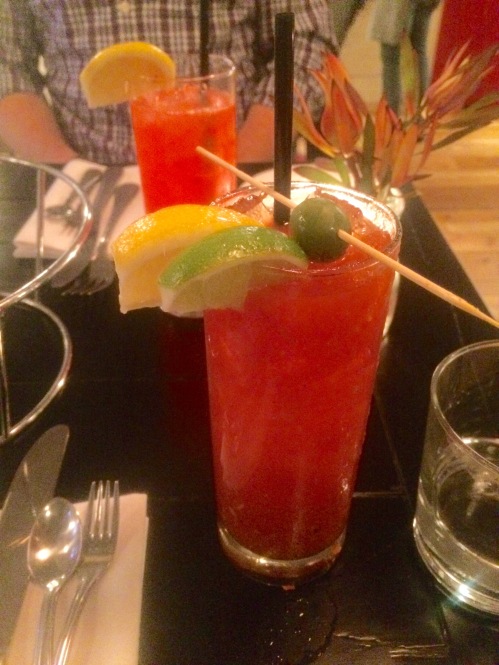 The dinner menu at Crave is pretty eclectic, and has seafood dishes with flavors inspired from Japan, India, Italy, etc.  But the underlying theme for each is that it’s delicious.  To give you an idea, they have octopus, scallops, broiled fish, and squid ink pasta.  They have a couple options for people who don’t eat seafood, but honestly those people should just go away.  Matt ordered the Lobster Curry of course, which I secretly wanted but I let him order it.  And man oh man, there were huge chunks of lobster in a completely savory broth consisting of eggplant, bamboo shoots, and what I’m guessing is a base of curry spices simmered in a seafood broth.  The broth was salty but not too much so, an beautifully reminiscent of complex Thai flavors.

I ended up getting the Seared Rare Yellowfin Tuna, which was served on top of roasted corn, homemade chipotle sauce, and a sliced fingerling potato, and topped with a sprinkling of queso fresca.  What I loved about this dish is the originality.  I feel like usually when a restaurant serves ahi tuna or something similar, it’s incorporated with Japanese flavors like sesame and soy sauce.  Instead, this tuna was paired with Mexican flavors, which was absolutely inspired.  The tuna was perfectly seared and was cool and fresh in the center, but I think my favorite part was the corn mixed with that delicious chipotle sauce.

I can honestly say that this was the most satisfactory dining out experience I’ve had in a long time.  I don’t exactly know how to describe it, but I was in the best mood ever as I left the beautiful restaurant on a beautiful evening, pleasantly full with delicious tuna, oysters, and bloody mary.  The waiter was so sweet he even gave us a free ginormous cookie to take with us, since Matt knew a couple waiters there and could make friends with a rock if he wanted to.  And btw, the cookie was really the icing on top of the cake, as we ate it walking through Times Square on the way to the theater.

Next time you’re on the UWS, GO THERE.  Especially now that the weather’s getting warmer, the beachy atmosphere, phenomenal food, and friendly service will make your meal unforgettable.  Crave gets 4.5/5 stars!