As you may know, I absolutely love trying new and unique dishes from other cultures.  Sometimes I feel like I’ve barely scratched the surface of what’s out there!  Eating is one of my favorite parts about traveling, and I look forwards to trips just to get my hands on as much grub as possible.  Unfortunately I can’t hop on a plane every weekend though, but that’s why I’m glad I finally decided to purchase a Try the World subscription!  This month’s box was Portugal, and it included this lovely recipe for Broiled Codfish.

It’s funny how excited I get when a Try the World box comes in the mail for me.  This is my second one, and I last got my French box about a month ago.  I saw it when I came home from work and practically ran up the stairs to open it.  I just love the anticipation of not knowing what’s inside, you know?  Sorry I’m super nerdy.  Anyways, inside I got a jar of pumpkin and hazelnut jam, some little cookies, canned jack mackerels, apple and cinnamon tea, olive oil, codfish seasoning, hot sauce, and cartelized onions in port and balsamic.  Yum, right?!

What I like most about the little Try the World packages is that it includes a recipe.  This month the recipe was for Broiled and Crusted Codfish, because apparently salted codfish, or balcaulhau, is a recognizable Portuguese dish.  Love it!  And the recipe seemed pretty healthy too, so I decided to whip it up for dinner that same night!

I wanted to have some fun and make a little Portuguese appetizer too using the mackerel, because there were instructions for making mackerel toasts as well.  Knowing my boyfriend like I do, I knew he wouldn’t like the mackerel toasts.  He doesn’t like sardines, anchovies, etc., and I already sensed that he would be hesitant.  But I shot him a “you’re going to have to be adventurous for dinner” text and left it at that.  He seemed receptive.

So I cut up a baguette, drizzled with olive oil, and popped in the oven to crisp up.  Then I topped the toasts with a sliced half mackerel, sea salt, some Piri Piri hot sauce, and some fresh parsley.  They looked pretty!

Of course, canned fish isn’t exactly my thing either… of course I would prefer fresh when given the option.  But I know that I have a pretty eclectic palate and can eat just about anything so I wasn’t deterred.  I tried one before Matt came, and they were fine!  Like I said, I would have loved a fresh piece of fish — the oiliness from being soaked in olive oil wasn’t the most appealing thing — but they were still tasty.  I can see myself sitting outside a nice Portuguese cafe near the ocean with a glass of white wine and munching them.  Well, correction, I could imagine that vision, until I served one to Matt and his eyes watered and he gagged.  He proceeded to ask me if he could spit it out.  Wishful thinking vanished immediately.

I had a bit more success with the main course.  The cod was broiled perfectly, and the entire dish had very earthy flavors from the kale and the bay leaves.  I really liked the overall taste of the meal, but I do have a serious complaint about the product that came in my Try the World box.  The recipe said to use the codfish seasoning rubbed on the fish and then broiled, but the codfish seasoning had crunched up dried bayleaves in it.  Dried bayleaves don’t soften… but they weren’t whole so I couldn’t just remove them like I usually do.  I don’t know what I was thinking but I used that rub and I regretted it.  Eating hard crunchy bayleaves in every bite was so unappetizing.  And there were stems from other things in there as well.  I highly doubt that’s how the Portuguese do it….  Next time I’ll use my own fish rub (mainly it was parsley, bayleaves, garlic and salt) but with whole bayleaves placed on top of the fish.  I think that will result in an overall delicious dish.  The recipe I’m giving

By the way, this recipe may be altered slightly from the original, I used slightly different measurements and also left out chorizo.

In a small bowl, combine breadcrumbs, parsley, minced garlic, 1 Tbsp olive oil, about 1/2 tsp of salt, and the lemon zest together.  Set broiler to high.  In an oven-safe skillet, add the cod pieces.  Drizzle with olive oil and lemon juice.  Place a bayleaf on top of each piece. Add the can of tomatoes to the skillet, in between the fish pieces, and then add the kale on top letting the tops of the fish peak through.  Add the vegetable stock evenly over the skillet.  Broil for about 10 minutes, and then add the bread crumb mixture generously over each piece of fish and continue broiling for another 2 or 3 minutes, until browned.  Serve, but remove the bayleaf before eating. 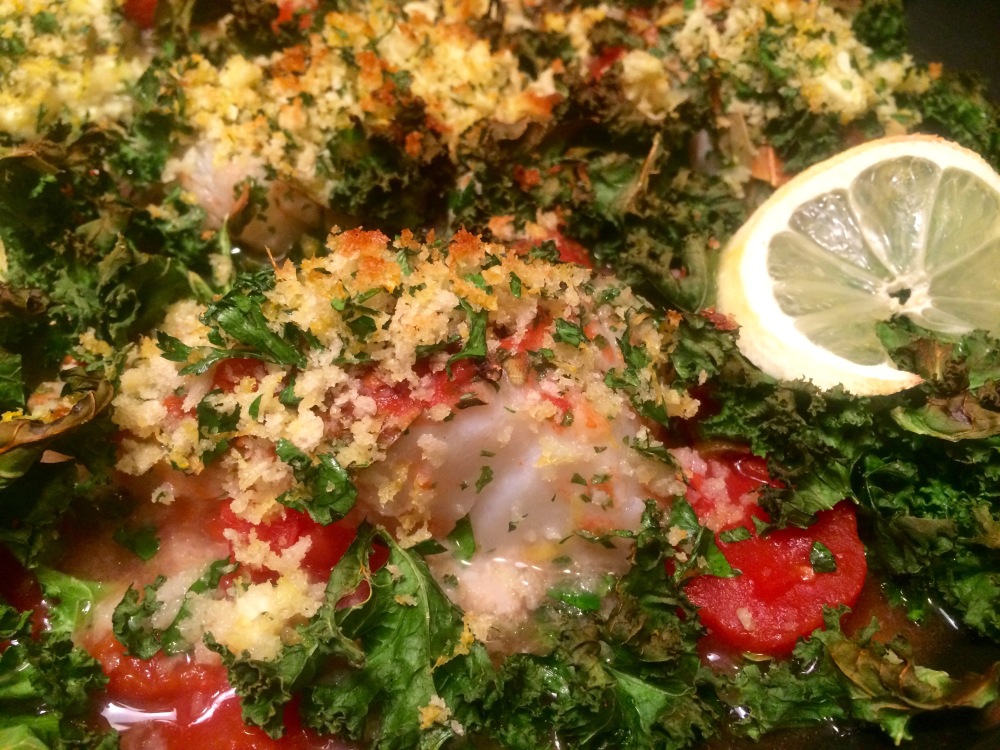