Don’t ask me why, but for some reason I had never been to Cape Cod before a month and a half ago. After going in September for a wedding I think I’m addicted now. It was so quaint, cute, and quintessentially New England! Of course with cute, beachy, New England towns come some awesome seafood (lobster rolls, anyone?), and I was lucky enough to get to try and place that had some classic Cape specialties.
I’m only writing about one restaurant, the Lazy Lobster because it was so perfect in every way and I don’t believe we had a full meal at any other place. We actually ate there for breakfast twice out of our three days there. It was rated very highly on Yelp and Foursquare, and when I punched it into Maps it turned out that the restaurant was literally right across from our house that we were staying in. Literally on the other side of the road across from us. What awesome luck, right? It seemed silly to try anywhere else.

It’s a small little building with a definite “fish shack” vibe. Its décor is simple and unpretentious and you get the family-friendly feeling as you enter. It wasn’t too busy when we arrived, but the waitress explained that next weekend they would be closing for the season so we probably just missed the crowds.

One of the things that really made this place awesome was the selection of Bloody Marys. There is a whole list of different types of HUGE Bloody Marys that can be made with lobster claws, jalapeños, tequila, etc. For our first breakfast on our Cape vacation we all ordered one to celebrate, and it did not disappoint. They were gigantic and delicious, obviously house-made, and I got mine topped with a big fat lobster claw. I can’t think of a better way to start out a New England wedding weekend, can you? Although I was working on it the whole meal I still had some left in the glass when we left.

Their food menu was just as impressive as their Bloody Mary selection. We went for brunch, obviously, and it had everything I could have dreamed of. The majority of my favorite foods were all in one place! Lobster scrambles, Crab Cake Benedicts, New England Clam Chowder, breakfast tacos, Po’ Boys… you get the picture. It made it almost impossible to decide on one thing! For my first day in New England I would be a schmuck if I didn’t get some Clam Chowder so Matt and I decided to share a bowl (he shared reluctantly). For my entrée I just couldn’t resist the crab cake benedicts, served with homefries.

These were probably my favorite benedicts that I’ve had in a long time. As you may know I always order benedicts and I’m nearly always disappointed; either the whites are runny or the hollandaise has made everything too sloppy and mushy. These were just perfect. The eggs were expertly poached and topped with just a smidge of hollandaise; enough to coat the top of the egg but not enough to run all over the muffin and soak the plate. The crab cake was great also. Lots of times brunch places skimp on crab cakes because they know they’ll be covered in hollandaise, but this was not the case. They had a lot of crab and very little breading inside, and were simply done and the perfect compliment to my egg yolk and hollandaise combo.

I was so satisfied and stuffed by the end of the meal I could have rolled home, napped, and came back for dinner. Thank goodness we all agreed to go back two days later, before we were set to drive home. Although I skipped on the Bloody Mary this time (huge cocktails aren’t good for long car rides) we started with the deviled eggs, which were fantastic. I also got a Lobster Scramble to try, which had lobster, Swiss cheese, hollandaise, red onion, and asparagus. Yum! Served with a side of toast. Matt got a scramble with ham, bacon, sausage, cheddar jack, and scallions.

The Lazy Lobster definitely stuck with me as one of my favorite seafood/brunch experiences I’ve ever had, and it’s a place I’ll visit again and again whenever I’m in the area. Lazy Lobster gets 4.5/5 stars! I will surely be back for more! 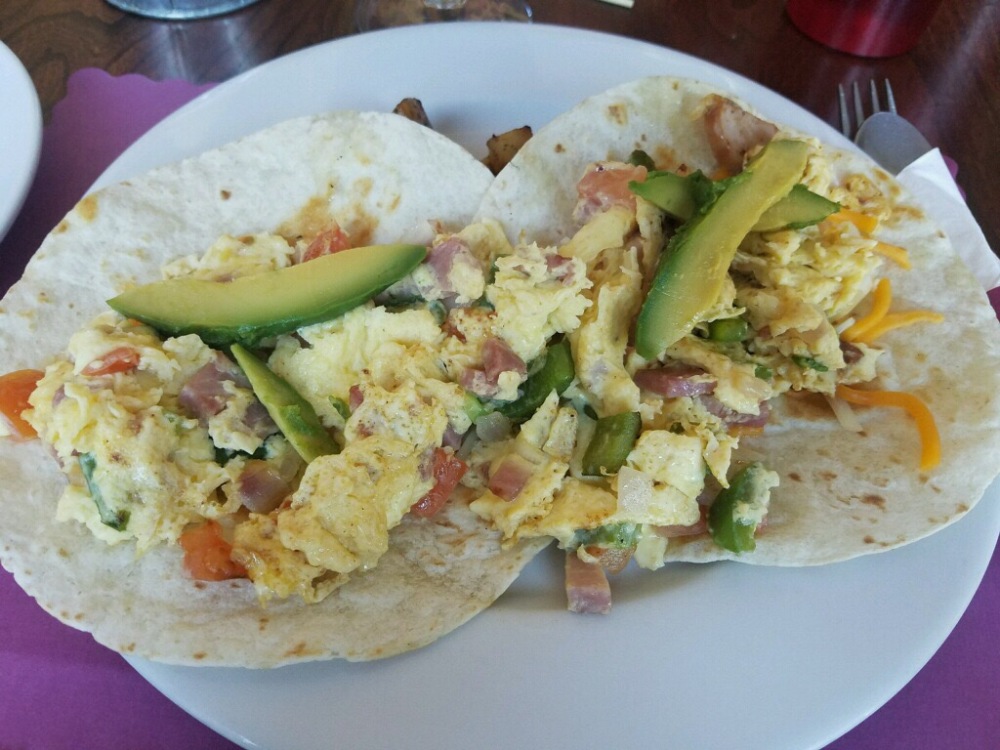