This week I decided that I should probably stop eating buffalo wings and beer every day and dust off some of my old cookbooks to find something healthy and interesting to make.  Since it’s almost beach-body season I’m determined to eat clean until summer (and hopefully long afterwards)!  I rediscovered my Williams Sonoma Essentials of Slow Cooking cookbook and realized that it’s just what I need to make it to summer without loosing my mind.  This recipe for Sri Lankan Fish Stew caught my eye because of the minimal oil, the fact that it’s low carb, and I pretty much had all the ingredients!  It also turned out to be AMAZING!

Matt and I have really gotten in the habit of ordering in or going to bars to eat whenever I don’t feel like cooking, which the scale is beginning to hate me for.  Not to mention, something about warmer weather makes everybody in NYC want to eat, drink, or a combination of both!  After stepping on the scale on Tuesday I realized that a month of baseball games, happy hours, and seeing my family was really packing on the pounds.  I’ve got a wedding in 11 months!  I have to buckle down for the rest of the year.

This is why I’m glad I rediscovered my slow cooking cookbook because it really is such a healthy cooking method.  Since slow cooking retains all the moisture you really don’t need to use that much oil — especially if you’re using a crock pot you can just pile everything in and it will cook itself.  Also, so many of the recipes are meals in themselves with plenty of veggies so you don’t need to add sides of rice or bread (which I have sworn off of FOREVER).

I wanted to try this Sri Lankan Fish Stew first because I’m not sure I’ve ever had anything Sri Lankan and I was intrigued.  In addition to already having salmon, I also had all of the spices I needed since I cook Indian recipes so much — they’re essentially the same!  And sure enough this recipe turned out to have those beautiful warming and complex flavors that I love so much in Indian cooking.  I served Matt’s with rice (I had to or else he gets cranky) but I served mine on top of wilted spinach which in my opinion was even better!  We both gobbled it down and I felt unusually satisfied after the first serving!  I also had it for lunch today on it’s own and I was full!

Disclaimer: this recipe does have coconut milk which is high in fat, but is typically considered a good fat.  The same with the salmon — salmon is very fatty but the fat is packed with nutrients.  It’s probably why we felt so satisfied 🙂

Also, I ground my own coriander, clove, and black pepper, because I had the whole spices and it really makes a difference in flavor.  Try it! 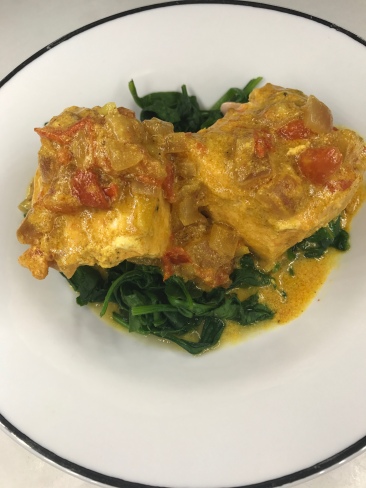 Heat the oil in a medium-sized Dutch oven or heavy saucepan over medium-high heat.  Sauté the onions and garlic for a few until beginning to turn translucent, then add all the spices.  Sauté for about 30 seconds until the spices are very fragrant and then start to smell nutty.  Make sure all the vegetables are coated.  Add in the tomatoes and sauté for about 1-2 minutes, then add in the tamarind paste with water, sugar, salt, and coconut milk.  Partially put a lid on and simmer on low for about 25 minutes.  Then add in the pieces of fish nestled in the sauce, partially cover and continue cooking for about 20 minutes.  After this time the fish should be very moist and flake easily with a fork.  Taste and season with more salt if necessary.

Serve on it’s own, with rice, or with a leafy vegetable like spinach or broccoli.